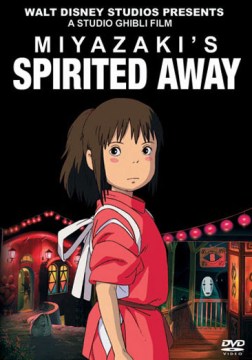 When a young girl gets trapped in a strange new world of spirits, she must call upon the courage she never knew she had to free herself and rescue her parents.
Publisher: [United States] : Walt Disney Home Entertainment ; Burbank, CA : Buena vista Home Entertainment, [2003], c2001
Edition: EnglishFrenchJapaneseSpanish language ed.
ISBN: 9780788844614
078884461X

Alternative Title: Title on container : Miyazaki's spirited away
Sen to Chihiro no kamikakushi

This is my favourite Ghibli movie! This movie is an exciting adventure movie that left me wanting more. The animation, true to Ghibli Studios' style, is beautiful and unique. Due to the content of the film, I would suggest it to children 10 or up. Also, keep in mind that this movie has a lot to do with the Japanse culture and beliefs.

Spirited Away is a 2001 Japanese animated fantasy film written and directed by Hayao Miyazaki, animated by Studio Ghibli. I enjoyed this movie because it had nice cinematography and a nice soundtrack. It tells the story of a 10 year old girl by the name of Chihiro, while moving to a new neighborhood, enters the world of spirits. The characters were very delightful but there was no villain character. The way it shows and combines the love of family and the importance of friendship is breathtaking, and I’m constantly in swoon-mode when it comes to Chihiro and Haku. This movie reminded me of Avatar: The Last Airbender. I would recommend this film to teens 13 and up. Rating: 3/5
@PrettyKitty of The Hamilton Public Library's Teen Review Board

Spirited Away is an animated film released in 2001 and directed by Hayao Miyazaki. It’s about a little girl named Chihiro and her trip to an abandoned amusement park with her family, from here she finds out it’s a place for supernatural beings to take a break and to get out of there she will have to work. This is one of the most well known movies in Studio Ghibli movies and I can see why. It tells a great story of a little girl maturing over this period of time trying to save her parents and trying to get out of the place. On top of also having great animation that is easy on the eyes and it's kid friendly. Some scenes in the movie that were really memorable was when Haku was feeding Chihiro some rice balls in a beautiful flower field and getting a look inside the bathhouse. There are numerous popular music tracks that are in the film that pull the film together creating a masterpiece. Check it out! 5/5 stars
@minimonie of the Hamilton Public Library's Teen Review Board

I love this movie & the director Hayao Miyazaki’s painstaking dedication to explore the fantasy worlds he creates. The bounds of his imagination seem endless as Chihiro, the story’s young heroine, is thrust into the spirit realm & is forced to navigate it to save her parents. This is (at the very beginning) when her parents turn to pigs - the plot’s lack of hesitation for eerie shifts, really makes the movie’s main setting seem real & surreally dangerous. I liked the eight-armed man that powered the boiler room - inspired by a creature in Japanese folklore, which added to the intrigue, in my opinion. Personally, I also enjoyed the metaphor of the “stink spirit” for pollution. I thought all the backgrounds were tremendous & the animation was lively & extremely detailed. The spirit world at night, glistened, golden from lantern light - like a painting. I saw meticulous care given to all these characters that populated the world - all these unique looking spirits. And, the story was captivating, all the way through (so were the visuals). I would definitely recommend for a fantastical experience. 5/5 stars
@reviewperson of The Hamilton Public Library's Teen Review Board

I grew up watching Disney and Studio Ghibli. This was my first Miyazaki film and I never really understood it until I got re-obsessed with the films last year. Spirited Away is by far my absolute favorite. The way it combines the love of family and the importance of friendship is breathtaking, and I'm constantly in swoon-mode when it comes to Chihiro and Haku. This is one of my absolute favorites, and so I definitely recommend. One of the best Ghibli films out there, trust me.

Nice cinematography. Nice soundtrack. The plot is a bit weird as well as the characters, nonetheless they can be cute and there is no villain character. The theme is complex which covers transition from childhood to adulthood, environmental issues, capitalism and consumerism according to the film maker, but I think it’s vague.

One of my favorite Ghibli animes...second only to Totoro

Written and directed by Hayao Miyazaki in 2001, this Japanese animated fantasy follows a moody 10-year-old girl into a wonderland where her parents are turned into pigs by the witch.
Although highly rated in the past, the film turns out a somewhat disappointing story for me as an adult.
In any case, I'm pretty sure, an under-10-year-old kid would love to watch it.

Haven't read it but it's good.

Perhaps my favourite movie ever. Things go very, very sideways for Chiharu, and then, with a little kindness, some help from her friends, and a lot of hard work, things get back on track. The animation is stunning, and the storyline moves smoothly, but also leaves breathing space. An excellent introduction to Studio Ghibli's oevre, contemplative, creative, slightly melancholy and also hopeful, and just gorgeous.

“Spirited away” is a 1997 anime/fantasy film. It's at the top of my favourites as it has all of the things I love. An engaging storyline, tons of likeable characters, and Fantastic animation. Every scene had you hooked on, waiting to see what would happen next.
Depending on your preferences, there are a lot of likeable characters throughout the movie. My favourite was Haku as had a cool and interesting ability. Many of the characters grow within the movie as they realize what they have to do and what actions they must take. I think there was nothing to change. Everything fit together pretty well and made it interesting.
I give this movie a 5/5 and recommend it to anyone who enjoys a good old classic animation film.
@madlad514 of the Hamilton Public Library's Teen Review Board

Spirited away is a lovely Japanese animated film that takes us as viewers on an intense adventure through a world of spirits. This film may come off as a bit frightening for younger viewers, but this is definitely a wonderful film for views ages 10 and older. The beauty of this film is that it shows how hardworking truly rewards you. This movie is focussed more towards Japan's Indigenous culture and this is something many might find weird. I personally loved this film and I think the movie was well made overall. The animation and the artistic part of the film is hard to overlook! You can tell that many people worked very hard to produce and make the film! Definitely a 4 out of 5 stars from me!
@SpookyCat of The Hamilton Public Library's Teen Review Board

I'll be biased, I watched this many times when I was young, but watching this as I get older into a adult, I noticed how the main theme of this story is that childhood can brought back through ways, Chihiro (Sen) tries to reclaim to her name and tries to returns to the human world with the help of a another boy named Haku, who already lost his childhood and full name, but later regains it back when Chihiro remembers the moment when she first met Haku back in the human world. Also, the animation and music are top notch, makes the world much believable, it make my heart warm. Overall, an 10/10, a truly fine animated masterpiece.

green_dog_6933 thinks this title is suitable for 8 years and over

indigo_magpie_20 thinks this title is suitable for All Ages

blue_dog_25051 thinks this title is suitable for All Ages

LlamaGirl1 thinks this title is suitable for 10 years and over

Schoolgurl95 thinks this title is suitable for All Ages

Theicehockeygear3471 thinks this title is suitable for 8 years and over

Red_Bird_90 thinks this title is suitable for All Ages

lucyliu100 thinks this title is suitable for All Ages

ukellyle thinks this title is suitable for 11 years and over

Selina23 thinks this title is suitable for All Ages

"It's something you wouldn't recognize. It's called love." Kamaji

Chihiro's Father: A new home and a new school? It is a bit scary.

Chihiro: I think I can handle it.

"Anyone can see you're a lazy, spoiled crybaby and you have no manners." --Yubaba to Chihiro

"Once you've met someone, you never really forget them. It just takes a while for your memories to return." --Zeniba

Reads Card: "I'll miss you, Chihiro. Your best friend, Rumi."
Parent: Chihiro. Chihiro, we're almost there. This really is in the middle of nowhere. I'm gonna have to go to the next town to shop. We'll just have to learn to like it. Look, Chihiro, there's your new school. Looks great, doesn't it? It doesn't look so bad.
Chihiro: It's gonna stink. I liked my old school. Mom! My flowers are dying.
Parent: I told you not to smother them like that. We'll put them in water when we get to our new home.
Chihiro: finally get a bouquet, and it's a good-bye present. That's depressing.
Parent: Daddy bought you a rose for your birthday. Don't you remember?
Chihiro: Yeah, one. Just one rose isn't a bouquet.

Plenty of quotes from DVD version in IMDb. The BR version is more child friendly etc. e.g. start of the movie, BR version:

Card from Rumi: Good luck, Chihiro, Hope we meet again
Parent: Chihiro? Chihiro! We're almost there. This really is the middle of nowhere. I'll have to shop in the next town. We'll just have to make do. Look, there's the elementary school. That's your new school, Chihiro. Why, it looks very nice.
Chihiro: liked my old school. Mom, my flowers got bent.
Parent: No wonder, the way you squeeze them. A little water and they'll perk right up.
Chihiro: My first bouquet, and it's farewell flowers.
Parent: What about the rose you got for your birthday?
Chihiro: One rose? One rose isn't a bouquet.

" Now I remember your name. Your name is the Kohaku River." said Chihiro to Haku (while his flying as the dragon)

Haku:'no,but for some reason i remember yours

"Don't cover your mouth-that's an insult to our guest!!"

Other: I second the Other

Other: All the extreme awesomeness may be to much for you to handle

Ten-year old Chihiro and her parents are moving when her father takes a wrong turn. Her father thinks they've found an old amusement park and insists on exploring. Chihiro, scared to be alone, accompanies her parents.
They cross a dry riverbed. Chihiro's parents find an unattended restaurant stall and gorge themselves while Chihiro wanders off. She finds an exquisite bathhouse. Suddenly a boy orders her to cross the river before nightfall. Spirits begin haunting the park, and when Chihiro returns to her parents, they have become pigs.
Chihiro runs to the river, but it has flooded and is impossible to cross. The boy, whose name is Haku, finds her and says he has known her since she was little. He tells her to ask for a job from the bathhouse's boiler-man, Kamaji. Kamaji and the worker Lin send Chihiro to the witch Yubaba, who runs the bathhouse. She gives Chihiro a job but steals her name. She is renamed Sen (千?), the first character of her name.
Haku shows Sen her parents' pigpen. Among her belongings, she finds a goodbye card addressed to Chihiro. She realizes that she's forgotten her name. Haku warns her that Yubaba controls people by taking their names. If she forgets hers like he has forgotten his, then she cannot leave the spirit world.