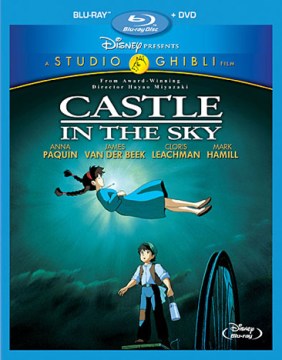 Castle in the Sky

“Castle in the Sky” is an animation movie released in 1986. The story is very interesting and exciting as the main characters travel place to place while trying to achieve their goal. All the settings that took place were fascinating and new that it didn’t make the movie look boring or plain. Some of the scenes were detailed and animated pretty well for a 1986 film. The main characters are well done as they show many emotions and signs of hardships and difficulties throughout the movie. More characters are introduced throughout the movie, while some of them are helpful and good-hearted, others are deceiving and sinister. The main characters backstories were also captivating to hear, and the plot was well-thought-of. It contained lots of adventure and a really good story concept. Rate this movie 5/5 and recommend it to anyone who adores fantasy/romance/action movies! @Madlad514 of the Hamilton Public Library's Teen Review Board

I had watched this long time ago but couldn’t remember the plot. Watched it again this time and found out the movie was average. The plot, the picture, the music, nothing is to remember.

Lovely movie, made better featuring Mark Hamill as the villain. Believe me when I say that he plays villains even better than he plays earnest farmboys.

While the animation and music are outstanding, I felt very little of the magic that characterizes Miyazaki's other movies because of the many violent scenes (which make up about half the film), and so I didn't really enjoy it. I can't imagine letting a young child watch this.

Imagination! You won't find this anywhere else.... extra features of behind scenes...

Cineplex occasionally screens Studio Ghibli Films. You can check their schedule at https://www.cineplex.com/Events/Anime

i was sure i'd seen this movie at least once before, because last year i went through and watched all of miyazaki's/studio ghibli's films, most of which i'd seen before, and watching it for the 2nd or 3rd time recently, i realised why i couldn't remember it: there was nothing in it that engaged my attention. thin character development, thin plot, animation is okay but not stunning. i was SO bored. and the girl character's accent kept changing which annoyed me to no end. i get that this is considered a classic, and most of the other comments have been raves, but compared to most of miyazaki/ghibli's oeuvre, this falls far short, in my opinion. i hope after this i remember that i've seen it and never watch it again. it made me want to do anything else but watch it.

It’s an amazing film. If you enjoy anime, then you’ll be enthralled with this film. The artwork and storyline are strong and well-done. Highly recommend if you enjoy action/adventure anime.

This is a terrific film, even if it is for children; a variably paced action-adventure film with wildly imagined places, rich in symbols and mytho-poetic tropes put together in novel ways. The best part of the whole thing is the music - Tchaikovsky couldn't have done it better!

This is a wonderful master piece created by Hayao Miyazaki, best enjoyed in original language with subtitles. If you pay attention Miyazaki's movie/anime often has a profound underlying messages. This one shows power.

Criticisms & tid bits:
The original title is "Laputa, The Castle in The Sky" released in 1986 from Studio Ghibbli, a Hayao Miyaza's animation company, not Disney.
Disney has a large distribution network and put together different dub voice actors, and even took the liberty to add extra dialogues and sounds in moments of silence.
It's not the first time Disney have put their names on other masters works. Take Lion King for example, its semblance is amazingly close to Kimba, The White Lion, which was created by Osamu Tezuka in The 60's, despite that the original artist have not been compensated. I'm simply disgusted at their audacity: https://en.m.wikipedia.org/wiki/Kimba_the_White_Lion

(Patsu) *to Sheeta* "Well, you laugh like a normal person. With the way you fell from the sky, I thought you might be an angel or something."

(Dola) *gives Patsu a gun* The boy has become a man!

Dola: [as Laputa soars away] That tree's gettin' away with our treasure!

Dola: Ah, what can I tell ya? They just really like dessert.

Dola: Will you shut up?

Henri: And I like chocolate cake with that... Oh, what's that frosting? It's kinda pink and swirly with...

Louis: I get to lick the spatula!

MARMOT0vv0 thinks this title is suitable for 8 years and over

white_fox_243 thinks this title is suitable for All Ages

Theicehockeygear3471 thinks this title is suitable for 6 years and over

lucyliu100 thinks this title is suitable for All Ages

angelasamuel thinks this title is suitable for All Ages

Love_Legolas_111 thinks this title is suitable for 10 years and over

bpn_303 thinks this title is suitable for 9 years and over

Triscal thinks this title is suitable for 8 years and over

Sheeta and Patsu must outrun both the Dola Gang and a group of government agents and military backed by Muska to discover the floating city born of legends, Laputa.

I wish I want a glowing pendant that floats down and up like Emily from Amulet and she wears a stonekeeper.

In the movie's backstory, human civilizations built flying cities, which were destroyed during an unspecified catastrophe, forcing the survivors to live on the ground as before. Just one city, Laputa, remains in the sky, concealed by a thunderstorm. In the opening scene, an airship travels though the clouds. On board are a girl named Sheeta and Muska, the government agent who abducted her. Without warning, an air pirate gang led by an old but vivacious woman named Dola attack the airship. Like Muska, they want Sheeta and her stone. The pirates invade the ship, and during the ensuing chaos, Sheeta manages to knock Muska unconscious and steals a blue stone. The pirates break into her room, and she tries to hide by escaping out a window and clinging to the outside of the ship. However, she loses her grip and falls into the night sky. As the unconscious Sheeta hurtles toward the ground, the blue stone emits a mysterious light slowing Sheeta's descent. From a small mining town (Slag's Ravine), a young boy named Pazu sees the light of the stone descending from the sky and runs to investigate. Upon reaching the mineshaft, he reaches out to catch the falling girl. To his amazement, she appears weightless (that is, until the stone stops glowing). Pazu decides to take her to his home. He tells Sheeta about the floating city of Laputa and his deceased father, a pilot who had taken a photograph of the city.

There are no notices for this title yet.